Contemporary Issues in an Idyllic Setting

New Hampshire: A world described in Robert Frost poems, small farms, picturesque New England villages where church steeples poke above autumn trees. It’s an idyllic image – and there is truth to it. But it is equally true that New Hampshire, like every state, suffers from the challenges of contemporary life in America, too.

At the Woodland Heights Elementary School in Laconia, New Hampshire, the principal and teachers work with a student population in which an estimated 10 to 12 percent of the children are homeless, and 78 percent are on free and reduced cost lunch.

The roots of Woodland Heights’ demographics lie in fundamental changes in the American economy. In addition to village squares and white churches, New England was the scene of textile, lumber and shoe mills that provided good jobs for generations of workers. Many are now closed and unemployment is a problem. 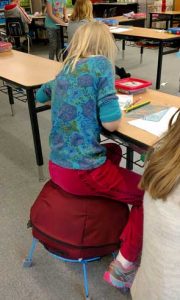 At the Woodland Heights Elementary School third and fourth grade classrooms are equipped with AlertSeats to provide an environment where children can learn. 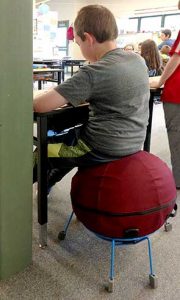 According to the school’s occupational therapist, AlertSeats have a positive impact on behavior in the classrooms where they are used.

“Ensuring success with every student, every day, in every way” is the motto of Woodland Heights, and everyone in the school is committed to its fulfillment, said Deborah Burrell, occupational therapist for the 420 children enrolled there.

Ms. Burrell sees the consequences of the difficult trend that impacts Laconia and some many other communities like it: Opioid addiction. Many blame this scourge on economic factors. Whatever the causes, it follows children to school.

“We have lots of children who have medical diagnoses including Down syndrome and ADHD,” she said, “and many who are affected by the opioid crisis in terms of violence, abuse and neglect that they see at home and in the community.”

One of the steps taken by the school to provide an environment where children can learn is equipping third and fourth grade classrooms with AlertSeats.

“We noticed that in fourth grade there were high needy behavior issues,” said Ms. Burrell, “and teachers were ready to try anything. I saw AlertSeats at a conference and Howard [Howard Newman, president of Newman Adaptive, manufacturer of the AlertSeats] sent us nine of the devices to try.”

“Everyone loved them,” she said. “They did the job.”

Principal Eric Johnson found the money to order AlertSeats for the children who need them in the grades where they are most needed.

“They have a BIG impact on behavior,” Ms. Burrell said.

Despite its challenges, the city where Woodland Heights Elementary School is located lives up to the popular image of New Hampshire. A community of 15,000 people, its streets are lined with beautiful nineteenth century buildings and bordered by Lake Winnipesaukee, Winnisquam Lake, Opechee Bay and Paugus Bay, it is a popular tourist area with a promising future – and its children well worth fighting for.

To learn how schools like Woodland Heights Elementary School and others throughout the country are using the AlertSeat™ and AlertDesk™ in regular and special education classrooms, visit our website at www.alertseat.com and select Product Reviews and Articles.