Accommodation in “the Sweetest Place On Earth”

The student’s wheelchair was a complex piece of technology. The Derry Township School District needed to accommodate it in the least restrictive way so that the fifth grade student could participate in class despite the size of his chair. They turned to Howard Newman, president of Newman Adaptive, who had a device that just might work.

Newman’s AlertSeats™ were already in use in Derry Township classrooms. According to Kelly Stewart, one of the district’s two occupational therapists, AlertSeats™ help the students who use them “be engaged in their work as learners.”

She says that they benefit children who have trouble staying focused because of ADHD or behavioral issues, and provide students with autism the movement they need without disrupting class. 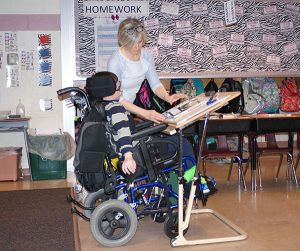 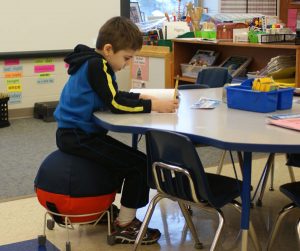 “Kids are motivated to sit on them and do not treat them as toys,” said Laura Alexander, a second grade teacher at the Hershey Primary Elementary School who has two AlertSeats™ in her classroom. 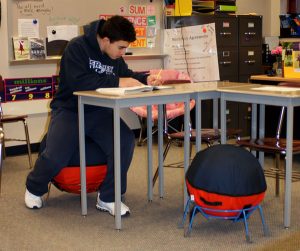 AlertSeats™ come in a variety of sizes because students come in different sizes.

“Students love them,” she said. “AlertSeats™ are fun to sit on; they provide an innocent joy.”

“I like the AlertSeats™ because they are more stable than the other ball seats,” said Laura Alexander, a first grade teacher at the Hershey Early Childhood Center, who has two of them in her classroom. “Kids are motivated to sit on them and do not treat them as toys, but as seats.”

Derry Township in south central Pennsylvania includes the town of Hershey, birthplace of the Hershey Kiss and known variously as “Chocolatetown USA” and “the Sweetest Place on Earth.” Just 10 miles east of Harrisburg, the state capital, Derry Township lies in a rolling valley that is a mix of farmland and suburb.

In addition to chocolate, the township is home to Hershey Park, a popular theme park that attracts more than three million visitors a year to the area. The Hershey Medical Center, another landmark, encompasses the Penn State Medical College and a hospital that serves patients from throughout Pennsylvania and beyond.

It is a progressive community, the kind of place where new ideas are tested and, if they show promise, implemented. AlertSeats found their way to the district when Carolyn Merrill, special education department coordinator for the Middle School saw them at an educational conference. She was responsible for the trial that resulted in the district ordering some for its elementary and middle schools.

Kelly Stewart was one of those who helped evaluate AlertSeats and later recommended a trial for the fifth grader and the AlertDesk.

“It is an amazing piece of equipment,” she said. “Because of all its features, it eliminates the need for other pieces of equipment.”

She cites the optional magnetic whiteboard surface, the range of adjustments it is capable of, and its maneuverability as just some of the advantages over tables tried in the past. But most of all, she likes the effect it has on the student.

“He has his own desk and it fits him,” she concluded.

To learn how school districts like Derry Township and others throughout the country are using the AlertSeat™ and AlertDesk™ in regular and special education classrooms, visit our website at www.alertseat.com and select Product Reviews and Articles.